skip to main | skip to sidebar

Background
In June of 2008, my wife and some friends signed me up to do a local 5K here. Even though I had been working out, I hadn't been running all that much. I trudged through it in just under 30 minutes. It was pretty miserable. Right then I caught the racing bug and decided that I was going to start running more seriously and try to get some better times.

After four months of slowly increasing my mileage and speed (and also studying Chi Running), I went to the Bill's Pizza 5k in 2008 and ran it in 23:30ish - an improvement of over 6 minutes total (or close to 2 minutes per mile).

For 2009, my main goal was to work up to half-marathons. I ran the Boston's Run to Remember Half Marathon in 1:43:45 (I was pretty pumped until I realized that the lead motorcycle had missed a turn (!) and lead all 4,000 runners off course, so the race was actually only 12.95 miles long). I also ran the Boston Half-Marathon in October. In between, I did some shorter races - a 10K and a 5K (I set a PR of 22:26 at the same race where I finished in 30 minutes last year). So it had been a good summer. Looking to close out the season in the fall, I had two races lined up - a return to the Bill's Pizza 5K and the Manchester NH Half Marathon the next week. I felt pretty good about going for PRs in both races - compared to the spring, I'd done more mileage with longer long runs all summer. I'd also converted to nose-breathing exclusively (both inhaling and exhaling) which seemed to help me control my breathing better. So the plan was to run both of those hard for PRs, and then use that fitness to carry me into the training cycle for the marathon next April.

The Race
I got to the race relatively early, eager to see what I could do. I picked up my number, then went for about a 2 mile easy warm up. About 15 minutes before the race, I downed an Espresso Gu (more for the double shot of caffeine since the sugar isn't really necessary for a 5K). Everything felt just about perfect. Although the weather had been miserable all week, we had a beautiful, picturesque New England fall day. Temps were in the 50s and the foliage was peaking.

I lined up pretty close to the front, but not obnoxiously so (since I knew there would be plenty of sub-20:00 runners at this race). The siren sounded and we were off. It was a little bit crowded at first, but I was able to sweep around to get in front of a big pack. At that point I was running with about 5 people. My race strategy (or lack thereof) was basically to go out as hard as I could and just hold on until the slight downhill at mile 2.5, then survive until the end. I was trying to go for sub-22:00 time, which meant that I needed to run better than 7:06 per mile.

Some runners like to downplay 5Ks since it's not a far distance, but I enjoy the challenge for running those 3.1 miles as hard as I can. About half a mile into the race, I decided that actually I really hate 5Ks because of the misery of trying to maintain top speed. It seemed like it took forever to get to the first mile marker. My lungs were burning. Finally we passed it at 6:37. Nice. I was already thinking sub-22:00 was in the bag and I might actually be able to go sub-21:00. Ah, sweet, sweet hubris.

Coming up about half way to mile 2, I saw the two folks in front of me start faltering a bit. I was hurting, but I still had enough to keep pushing the pace. As we climbed a small hill, I pulled up next to the guy in front of me and decided to chat a little. I grumbled something about hating 5Ks, and he chuckled. And then, just as we crested the hill, I saw a small pothole directly in front of me. I shifted my right footstrike a little bit to avoid the pothole, and BAM felt my right hamstring go pop. I took about 2 more steps before I realized that this wasn't going to be something I could just run through. I slowed to a stop, then tried jogging again. No dice. I limped back to the start line and put in my first DNF.

Lessons Learned
I'm not actually sure if it was the shift in my footstrike or just going too hard for my own good that caused the pull. My guess is that it was a combination of both. I also believe that in my arrogance of trying to run a time that was probably faster than I was trained for, I messed up my stride a lot. I think I was doing a lot of overstriding and hard heel striking, trying to do whatever I could to keep going faster. So, I think the main things I learned were:

It's been almost 3 weeks since the race, and I just started running again (did a really easy 3 miles yesterday - didn't even take my watch for timing). The first two days after the injury were really bad - I could barely walk and probably could've used some crutches. I ended up with a huge, ugly bruise on my right calf, which I think was from the internal bleeding from my hamstring pooling down there. I used a lot of ice, compression and massage in my healing plan. So far it feels like it's back to about 95%. Now I'm stretching it a lot because I think it healed a little tight (which is normal apparently). Obviously, I had to pull out of the Manchester Half Marathon. At this point, I'm just going to be slowly building back up on the easy miles to get ready for December, when the official training program for the Boston Marathon begins. No more races and definitely no speedwork! 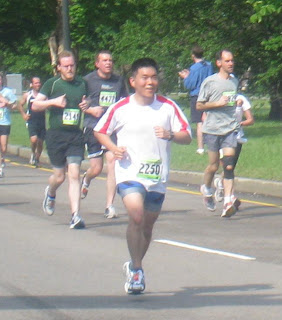 Welcome to my new blog. As you might know, I am training to run the Boston Marathon in April 2010 as part of the American Liver Foundation's Run For Research team. The Run For Research team is one of the oldest and largest teams associated with the Boston Marathon. We have a goal of raising $1.25 million dollars through the program this year. This might sound like a big goal, but last year the team rasied $1.1 million, so I think we can do it! The money goes to support research, education and advocacy to assist the millions of people suffering from various liver diseases across the U.S.
If you haven't seen my fundraising page, please visit Mike Kim's Fundraising Page. You can learn more about my story and my reasons for running the marathon there. As I am suffering from liver disease myself, I really appreciate any support you might be able to give!

I will be using this blog to give updates on my training and Liver Team events, as well as posting other random thoughts related to running, training or whatever else comes to mind. Thanks for stopping by.

MK
I am training for the 2011 Boston Marathon with the American Liver Foundation's Run For Research Team. This blog contains information about my training and the RFR program, as well as random other information about health and running.